Long time, no post, I know. Forgive me guys! I have truly missed blogging on Emphatic Dynamo:(

Today I bring to you a review of Christian  Contemporary Artiste, Riley Clemmons’ video tagged ‘Hold on’, which focuses on holding on through life’s tough times.  The Capitol CMG signed Riley Clemmons released this contemporary pop jam as a promotional video for her newly released self titled album. This Nashville born Christian Contemporary Artiste desires to use the power of music and words to wake up and encourage the generation she’s a part of.

This video evokes fitness vibes and would be the perfect work out song, sung on the scale of F# major with a cool techno beat and a variety of keyboard sounds. It’s all in set with different scenes with some house of macro effects of rain, lightning and the like.  Riley wears sporty outfits and headphones, and  is either running, dancing or meditating in different scenes.

She sings in a pop manner with some cool riffs. Apparently, Aretha Franklin is one of her vocal mentors, so surely, you might hear a shade of Aretha. I’m not 100% sure I heard it though. 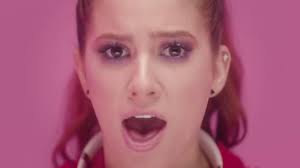 Riley dances by herself much slower than the techno beat of the song most of the time, but sometimes at its pace.

The lyrics focus on persevering during hard times.  She sings about lying voices telling her to quit, and I think that when there are voices in your head telling you the opposite of what God is telling you to weigh you down, you have to cast out such voices down by confessing the word of God.  Riley says ‘We all have something worth fighting for‘, and that is what the devil is after. You need to fight for your faith and for the fulfillment of your God given dreams. So you definitely have to survive the fire!

For more from Riley Clemmons, check her at her tour with Danny Gokey and Tauren Wells this September till November at the “The Hope Encounter” Tour.

Meanwhile, remember my review of ‘Impossible Things’ by Chris Tomlin and Danny Gokey? Click on the link to reminisce:)